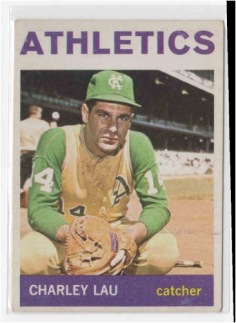 As the end of the year closes in, many of us find ourselves pressed for time.  I have a little more today than I’d expected because I managed to stump my toe severely while jogging up and down my half-mile rural driveway.  (The autumn leaves do a great job of concealing stones embedded in this hard red Georgia clay.)  No more exercise of that kind for me.  I can work back and forth in the back yard while shadow-boxing: my lower body will be shuffling and weaving, and my upper body (whose activity is where real cardio-vascular benefit occurs) will be much more involved than in an ordinary run.  Sayonara, jogging!

If I’d been able to put weight on my right foot, I would have made the second half of “The Lau/Hriniak Hitting System” yesterday.  (See Part One here. ) I’m feeling much better as the week wears on… but the weather today isn’t going to cooperate with videoing any demonstration.  Charley Lau, I should say, is one of my baseball heroes.  He managed to hang around the Big Leagues for parts of several seasons as a back-up catcher, but he never put together as much as a single full season of plate appearances in all that time.  As a hitter, he was… okay.  Sort of.  And therein lies his great virtue: thanks to having no purely natural gift for batsmanship, he had to grind everything out and piece one lesson laboriously onto another.  In the process of struggling to hit passably well, he was preparing himself to become one of the game’s greatest hitting instructors.

In more ways than the obvious ones, Charley was the antithesis of Ted Williams.  It’s not just a superstar-vs.-benchwarmer contrast: Charley’s whole system differed starkly from the Splendid Splinter’s.  Ted’s manual was titled The Science of Hitting, Charley’s The Art of Hitting .300.  (Therein lies an irony, by the way; for Charley’s “absolutes” are fully, comprehensibly explained, whereas Ted’s pronouncements are predicated largely on the art of being Ted Williams.) Ted wasn’t really adding anything much to the techniques that had dominated post-World War II ball, with his emphasis on throwing the front hip open and pulling the pitch.  Charley was all about fluidity and contact, with a tolerance of forward weight shift that echoed (unconsciously, I’m sure) the wisdom of the Deadball Era and the Negro Leagues.  Where Ted’s teaching seems to be full of tight circles, Charley’s has curves that tend toward the linear.

And speaking of teaching, while Ted was pretty much of a “do it my way” guy who never really imparted anything to his protégés except patience in waiting for a good pitch, Charley was a beloved instructor who helped his students refine whatever they brought to the table.  If that contrast seems unfair, read John Roseboro’s account of how Manager Williams (of the Washington Senators) once ordered him to keep signaling for curveballs even when a rookie pitcher was hanging every one of them and getting hammered.  Williams thought that the rookie would learn something if placed under this kind of pressure; Roseboro thought that he would lose whatever little bit of confidence he had brought to the mound.  Finally Johnny called for a fastball and got the kid out of trouble.  Furious, Ted benched his veteran catcher permanently: Roseboro never caught another Major League pitch.

And Charley?  Well, his tutelage helped along a fellow by the name of George Brett, along with several other Kansas City Royals of the championship Seventies teams.  Charley’s most famous coaching disciple, Walt Hriniak, went on to assist Wade Boggs, Dwight Evans, Bill Buckner, Carlton Fisk, and a big kid named Frank Thomas.  Of course, as the premier Red Sox alumnus, Williams was quite vocal in his criticism of Hriniak’s power-sapping, namby-pamby strategies.  Gee… you have to wonder how many homers the Big Hurt would have clubbed for Chicago if Walt hadn’t messed him up!

Now, as I explain in Part One of the video, I suppose that spreading the feet far apart probably does reduce power.  I had my young son spread out, as per the Lau/Hriniak method, when he was first learning to hit, for I knew he would never be the biggest kid on any team.  (He was often the smallest.)  After all the research I’ve done into Deadball hitters, I now wish that I could take that instruction back—not because a more active lower body can generate more raw power, but because it can increase bat speed if properly tapped.  Of course, more bat speed means more power; but it also, and primarily as far as I’m concerned, means better ability to wait on pitches and handle good fastballs.

In other words, I’m no longer as sold on Charley’s system as I was twenty years ago.  Much as I like to see hands emphasized in the swing, a cleverly operated lower body gives the hands more energy to tap.  (Frank Thomas, by the way, did not spread out in the box like Tim Raines, Wade Boggs, and other players whom I loved to follow but whose many extra-base hits were a product of foot speed, in one case, and the Green Monster, in the other.)

Am I taking Ted Williams’ side in this debate?  Maybe I am, just a bit.  But I prefer to think that I’m upholding the Cobb/Speaker position.  After all, nobody would ever have gotten away with putting a shift on those guys!