My most recently posted video is a bit “inside baseball” in its subject matter.  It discusses how to shift weight to the front foot—something that mature hitters occasionally ask me about on the sly, and that their coaches universally discourage or condemn, it seems.  As near as I can make out, practically everyone was a front-foot hitter throughout the Deadball Era… or, at least, the transition to what I call “lean back and hack” was very gradual.  Certainly by the home-run crazy Fifties, every kid was advised to keep his weight back; because front-foot shifting is, after all, a way to stroke line drives (which is why we teach it at SmallBallSuccess.com), and Fifties brain trusts all wanted balls leaving the yard.

Some of this long-ball obsession was probably (or possibly… how can we know?) a response to the clear availability of talented black players and the mounting pressure to sign them.  In the Negro Leagues, the standard hitting style remained very similar to what you would have seen in the MLB before Ruth (and the Babe himself, by the way, was a pronounced front-for hitter).  Most of the rising stars from that quarter were thin fellows who could slap the ball everywhere and run like the wind.  If GM’s and owners wanted to seal off Major League access to their darker-skinned brethren without raising a ruckus, they couldn’t have found a more subtle way of doing so than demanding that rookies show home-run power.  A conspiracy?  Or did the game’s magnates really believe that pinging bingles was a thing of the past?  They seemed okay with Nellie Fox and Richie Ashburn choking up and punching hits through the infield.

But they also gave a lot of grief to young white players who fought the new “elevation orthodoxy”—what we currently call “launch angle”.  I vividly recall Coot Veal’s lamentations in the classic anthology, We Played the Game, about being variously ordered to swing down, swing level, and swing up during one spring training.  He complained that he had always been a front-foot hitter—that Harvey Kuenn was a front-foot hitter, and nobody harassed him about it.  For that matter, the young Henry Aaron also transferred his weight heavily forward, as did Roberto Clemente.  So the emerging “stay back” orthodoxy couldn’t simply have been a snare laid by closet racists, in the final analysis.

Ironically, I recall Joe Morgan bitterly opining in print about the racism of Houston manager Harry “the Hat” Walker, who molded Bob Watson into a line-drive hitter rather than leaving him to be the homering machine that Mother Nature had made him.  The “racist” charge appears to have worked full circle in Joe’s comments.  Bob, a career .294 hitter who topped .300 eight times, could scarcely have done much to combat the Astrodome’s reputation for being Death Valley… yet Walker was a racist for not letting Watson air it out!

Whatever.  I wasn’t there.  Maybe it wasn’t what Harry said, but how he said it.  More common, though, was the attitude, “I can give a utility job to a white kid if he’s only going to spank a few singles.  If I have to take blacks on board, then give me a Mays, an Aaron, a Robinson, or a Banks.”  At least the first three of those four did a pretty poor job of “staying back”, by the way; so one moral of this story—and it holds good today—is that you can break with the orthodoxy if you can walk onto a tryout field and immediately start smoking pitches.  The coaches will shake their heads and mumble to each other, “I don’t know how he hits that way—must be a freak of nature!”… but they won’t mess with success.  They like wins better than racial purity or philosophical rigidity or whatever other objective is elevated by their prejudice.  Winning is always first.

Now, the debate about whether you win more games by letting Mighty Casey strike out twice, pop up once, and then drive one into the bleachers or, alternatively, letting Wee Willie draw two walks and beat out two infield hits in five trips is a legitimate discussion.  I also think it’s more than a little reductive.  Line-drive hitting isn’t Punch and Judy hitting.  Cobb and Speaker, for instance, continue to rank among the top twenty in all-time total bases: their totals in doubles and triples are staggering.  I don’t think a lot of consideration goes into evaluating this middle ground.  In 1961, youngster of African descent named Jake Wood led the American League in triples (with 14)… but also struck out 141 times.  Jake’s career as a starter was essentially over at that point; he had to move over so that Dick McAuliffe, whose decade-and-a-half of averages hovering around Wood’s rookie .258 mark of mediocrity, could smack 15-20 homers a year.  Both second-sackers averaged almost exactly one base advanced per every three plate appearances, after careers of very different lengths—but Wood swiped an additional 79 bases in his brief stint, and McAuliffe only 63 in sixteen seasons.  Dick also logged three years of 100+ strikeouts, so… so the difference remains the home runs.

In such contrasts, the distinction between driving the ball into the gaps and pulling it over the fence is brought into a somewhat more realistic focus.  Was Dick really such a clear upgrade over Jake?

For that matter (to get back to the original matter of this discussion), was Jake perhaps whiffing so often because coaches were nagging him to stay back, as they did George Altman and Mack Jones—two brilliant young black players ruined by big-league pedagogy?  Maybe these three would all be in Cooperstown, Joe, if they’d had a Harry Walker.

Shifting strongly forward allows your barrel to stay on the ball longer.  It removes much of the swing’s dip.  If you’re swinging down, as an oldtimer would have told you to do, it draws the descent into a remarkably level cut.  It also keeps your momentum headed into the pitch and makes pulling off the ball almost impossible.

Oh, but… but the power!  What happens to the power?  Doubles?  Who wants a double when you can have a home run?

And who wants a homer, two k’s, and a pop-up when you can have a single, two doubles, and a long sac fly?

There are ways to shift your weight forward that don’t cost you valuable micro-seconds.  It’s not just a strategy for an era when pitches were slower: lots of guys are doing it today.  Watch the video, if you’re intrigued. 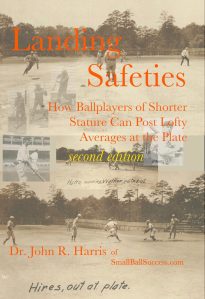