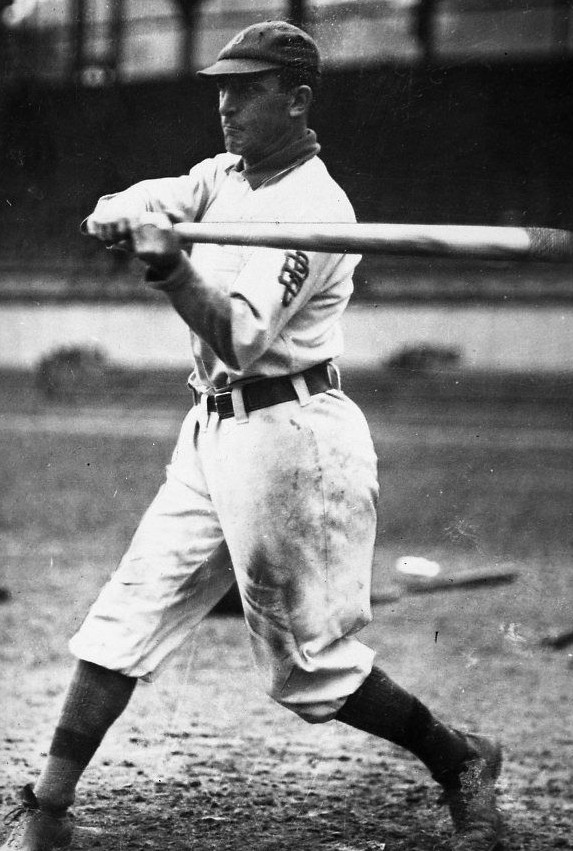 If I hadn’t already committed myself to the title above by calling last week’s blog “Part One”, I’d definitely rechristen this piece. The subject I want to explore now isn’t so much Cobb’s hitting advice to the world as the world’s confusion over certain aspects of his hitting. If only he had left us a little more direction in the matter of his hand-spreading, the controversy would evaporate.

But instead… well, let me get more specific by sharing a passage that I lately blundered upon in F.C. Lane’s 1925 classic, Batting—a wide-ranging series of reflections on baseball topics enlightened by Lane’s dozens (perhaps hundreds) of interviews with the game’s greats. As well as I recall, by the way, the book is available as a Kindle download for practically nothing. Anyway, the chapter that snapped me to attention was “Pulling the Unexpected”, and the particular passage was the following paragraph:

Now, Shocker doesn’t say that Cobb would only take a full swing after making one of the two manual adjustments mentioned: i.e., sliding the bottom hand up to meet the top so as to “punch” or sliding the top hand down on the bottom one so as to “slug”. Yet this is precisely what Charles Leehrsen claims in his superior book, Cobb: A Terrible Beauty. I’ve tried to contact Mr. Leehrsen and learn the source of his claim, since he doesn’t document it. Not having ever received a reply, I’m inclined to conclude that the paragraph I just cited is that source, and that Leehrsen excessively generalized its contents. Shocker’s point is that you never knew what the Georgia Peach might try next: bunting, shooting his hands up and slapping at the pitch, slipping both hands down and hacking away, etc., etc. But Mr. Leehrsen, I believe, takes this invaluable eye-witness testimony out of context by ignoring the unstated “et cetera”. To him, if Ty were not bunting but taking a full cut, then either one hand would slide up or the other would slide down. Cobb supposedly would never make contact with his distinctively spread hands preserving their distance apart.

I don’t really know why observers of yesteryear’s game—of what relics it has left behind—find hand-spacing so hard to accept as a straightforward advantage.  When I was a small boy, Leon Wagner was spreading his hands almost as wide as Cobb (having learned his ball in the Negro Leagues, where Deadball was still alive in the Fifties). Daddy Wags clearly wasn’t spreading his large mitts to fake out the infield.  I recall being fascinated by his special grip as I thumbed through my baseball cards.  Leon logged 173 home runs (if my quick math isn’t off) from the 1961 through the 1966 seasons.  Spreading the hands need not create a power deficit if you do it right: on the contrary!

The photo at this article’s masthead isn’t actually of Cobb, but of his Hall of Fame forerunner, Fred Clarke (who coached that other Wagner early in the twentieth century and taught him, among other things, hand-spreading).  If you look very closely, you can tell that too much of Fred’s bottom hand is visible for the top hand to be clamped down hard on top of it.  Even though the bat’s head is nearly pointing into the camera, the bottom hand’s knuckles remain suspiciously clear.  This signals us that the top paw would finish pressed against the bottom one in batters who used the technique because the follow-through would bring the two together.

How on earth, for that matter, would you suddenly slam top hand on bottom just before you swing, as Leehrsen pictures Cobb doing?  Would you do this just before beginning your attack on the ball?  Wouldn’t it disrupt timing and concentration to be messing around with grip at the critical moment?  Or if you made the adjustment sooner, then… then there would be no point in doing it.  You would have tipped off the infield sufficiently to give them a headstart moving to your pull side (since anyone who “slugs” from down on the knob is trying to pull).  If the essence of Cobb’s strategies was trickery, then this trick would have neutralized itself.  The rabbit’s tail would be showing before the magician could get his hat off.

Last week I created two videos that attempt to explain what I think might have been happening.  (They were going to be a single video, but the material kept mushrooming on me.)  In the second video—the actual demonstration—I try to show how Ty’s top hand would inevitably have ended up snugged against his bottom one if he were putting a full swing on the pitch so as to pull it.  The first video explains my objectives pretty much as I’ve laid them out here, complete with a reading of the Shocker paragraph from Lane.

To tell the truth, I find replication of Cobb’s contorted, awkward stroke quite a challenge.  I produced better results in a follow-up sequence where I shuffle off the back foot toward the plate in my load, then fly open.  And Cobb, by the way, may have done this, too!  We know from testimony as solid as Shocker’s (some of it appearing elsewhere in Lane’s book) that Tyrus would occasionally skip around in the box during his load, like Tris Speaker.  You have to believe that versatility carried to such degree would have driven corner infielders crazy.

As for the second piece of this two-part puzzle—the slipping of the bottom hand up to the top—I had little success demonstrating it either from a stationary set-up or a more mobile load.  Yet I feel confident that the intent here would have been to go the other way (for why would you want to hit the ball lightly to your pull side?).  The problem of giving away that intent too early may evaporate if we consider that a slide of the bottom hand up the barrel as the pitcher winds up would telegraph a bunt, bringing the third baseman (in Ty’s case) charging in… and to follow up that feint by pushing the barrel into the ball with both hands might well shove a scratch hit to the outfield grass.  Today we’d call it a “slap bunt”.

Ty Cobb didn’t exactly clarion his masterful use of deceptive techniques while he was an active player, and one can understand why.  In later years, however, he dispensed plenty of advice to those who would lend an ear (it could be argued, for instance, that he prepared Charlie Gehringer for a Hall of Fame career).  It’s a shame—no, it’s an outrage—that this generous side of Cobb’s character has been not just ignored, but erased by the slanders in Al Stumpf’s phony scribbles and purveyed far and wide by elite media types (looking at you, Ken Burns) who needed a “white Southern racist” to play Satan beside their cherubic Babe Ruth.

The real obstacle to unearthing instruction from Cobb’s legacy isn’t that he tried to bury his nuggets ten feet underground.  I think, rather, it’s simply that the game has changed too much for us to grasp certain principles that he would have assumed as givens.  Why explain the virtues of hand-spreading when approximately half the game’s hitters had been doing it since the mid-nineteenth century?  For that matter, why make a big noise about Tris Speaker’s skipping around in the box when, as Willie Mays tells us, Bobby Richardson had inherited enough of this wisdom to fade back from the plate suddenly if he wanted to advance a runner with a grounder to the right side?  In 1925, wouldn’t you suppose that everybody knew such things?  Jeez… do you have to tell a young driver where the ignition is?  Do you have to tell him to open the door before trying to sit down?

In Donald Rumsfeld’s immortal words, we don’t know what we don’t know.  My video’s very limited success at replication certainly taught me humility.  You can’t just pick up a bat and start doing what Cobb or Speaker did.  They must have put hundreds, perhaps thousands of reps into their signature moves.  Few of us can comprehend how those moves worked because, among other things, we can’t convince ourselves that spending time to master them would be a good investment.