My trusty old Personal Pitcher finally died the other day.  We had been through a lot together.  This handy, highly portable machine (if you’re unfamiliar with the model) fires out golf-sized Wiffleballs from atop a tripod.  Naturally, it doesn’t fire them very fast; but in hitting–and pitching–the relevant datum is reaction time or, as some call it, perceived velocity.  In other words, you can position yourself so closely to a little coffee grinder incapable of shooting out anything faster than 40 mph that you have just a split second to react; and you can whittle that split second down until it’s equal to the few dozen milliseconds that an Aroldis Chapman fastball gives you.

That’s how I used my Personal Pitcher.  To make matters even more challenging for me, it had decided in its waning years to vary the times between giving me the green alert-flashes that signal imminent firings; and then, going a step farther, it would tend to abbreviate the amount of time that flashes actually flashed, especially once it had been pumping a while.  I got to where I would listen for the rattle of a ball dropping into the firing chute rather than key on the treacherous light.  If a plane, a loud vehicle, or a lawnmower passed at the wrong moment, I was helpless.

A love/hate relationship developed between us–but, honestly, I did not intend to strike PP with my bat on one occasion, though I had pondered doing so on many occasions.  It was the crafty midget’s own fault: I got so far out in front of a change-up that the handle slipped away from me.  Then again, maybe that was my fault.  I should have rotated the used, cracked balls out for new ones more often… but I wanted the additional challenge of having pitches approach me at varying speeds and traveling different paths.

Well, R.I.P., old enemy, old friend.  Fortunately, I have a replacement all warmed up and ready to take the mound (for the signs of wear and tear in PP Senior had become all too apparent after the “flying bat” incident).

What I really wish to accomplish here is not the eulogizing of an old piece of equipment, but the emphasizing that my experimental methods have some validity.  No, I haven’t been testing myself against live pitching.  I don’t have the resources for that.  On the other hand, I am able to position myself so near to my pitching machine that I can simulate reaction times less generous than any I would have if a healthy youngster were trying to bore one in (and I don’t have to worry about getting concussed by a regulation hardball).  A critic might respond, “That’s exactly the problem.  Your reaction time is too brief.  You’re not simulating a game situation where the hitter has to key his load on the motions of a moving human body–you’re just coiling up and then springing at the first white you see in the air.”

Here’s my answer to that–and I will wrap up this short commentary after I make the point.  Hitting is all about giving yourself time.  If you can create a method that reliably produces low line drives off a reaction time simulating 90+ mph, then you can always scale that method down to circumstances that are more “real life”.  Said another way, if you develop a hitting method that allows you to be very quick, then you can wait for a very long time.  You can watch the pitch almost into the catcher’s mitt.

That’s what I seek to offer with the Deadball Era methods advanced on this site.  I want to go up the middle or even a little oppo, and I want to strike the ball’s heart with the barrel modestly descending rather than have to carry my bat head out well in front of the plate to achieve “launch angle”.  I can test whether I’m achieving my ends quite effectively by hacking away at the old Personal Pitcher… or, now, my new Personal Pitcher.  If I recruit human arms and legs at some point to give me more cues in my load–why, so much the better! 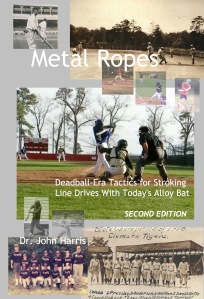 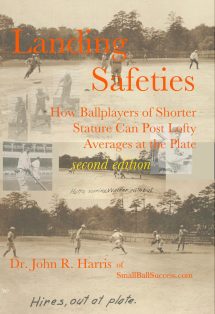